see detailed documentation for the state of support.

MetaFS::Cloud on GPU via Docker

using NVIDIA GTX 1070 with 8GB DDR5, all three services implemented as REST, loading the model once, evaluation of images on request via REST API. 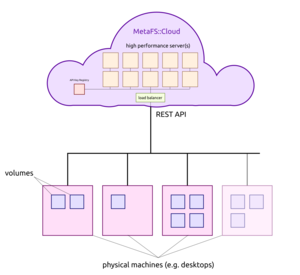 MetaFS::Cloud in enterprise application
In order to support complex and large deployments of MetaFS some computational intensive and complex services can be distributed via MetaFS::Cloud.

And with such also more heavy weight semantic analysis has been integrated preliminary:

as well existing semantic analysis of can now be distributed within a private cloud infrastructure. 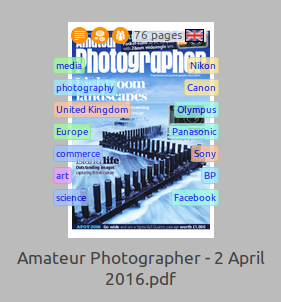 Partial Rewrite of the Core

to reach production quality of the software. The "alpha" phase was a pure MetaFS.org concept implementation, whereas the "beta" will trade some of the features for sake of stability. More details will be posted later.

The paper describes MetaFS briefly and summarizes what About features and the Handbook and the Cookbook describe in more details. 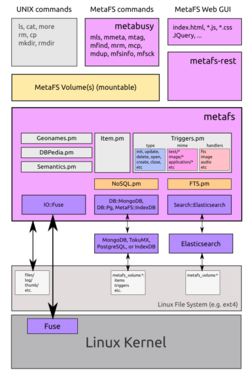 Even though the development continues non-public, I update the web-site and extend the documentation, e.g. Programming Guide.

Comprehensive refactoring of MetaFS has started, de-couple former MongoDB centric code to use more abstract NoSQL layer which allows then to use multiple backends instead of MongoDB. For the time being the development of MetaFS beta is non-public and eventually replace the former alpha (proof of concept).

MetaFS::IndexDB development has started and first steps for integration into MetaFS has begun. Eventually it will be released in 2016 with MetaFS beta, the preliminary API has been published.

IndexDB lifts some of the limitations of the other backends:

Two brief screencasts to show the early state of web-frontend to test the backend of MetaFS:

Note: the Location experiment with "Berlin" are two steps: 1) look up GPS coordinate of "Berlin" and 2) search with those coordinate in the MetaFS volume for GPS tagged items like photos.

MongoDB is working "OK", it could be better, some queries with additional post sorting cause immense memory usage and cause slow down. So for casual testing MongoDB is "OK", but MetaFS::IndexDB or PostgreSQL with better JSON support are still prefered once they are mature enough.

Some early tests of a 2D Web-GUI to cover the complexity of querying items: 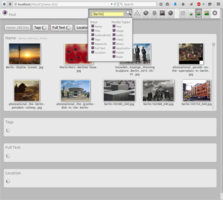 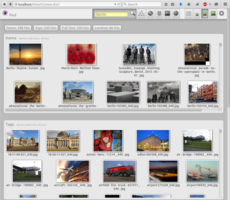 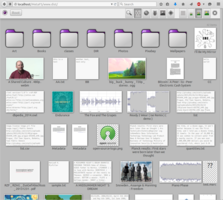 I queried "Berlin" as example so the Location would provide results as well, "Berlin" is a known location, and some photos have GPS location and those are found too.

The volume was mounted on a HDD not SSD, the lookup time on SSD is about 5-10% of a HDD.

In order to test image indexing (image-handler) a rudimentary interface is used to query a set of 280,000 images: 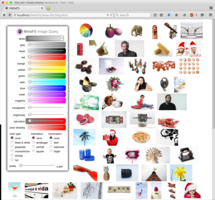 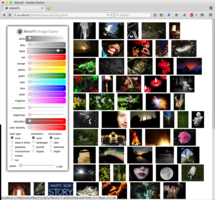 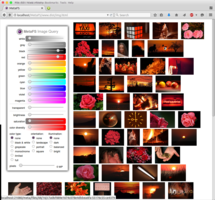 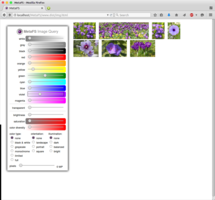 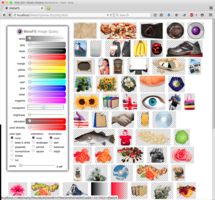 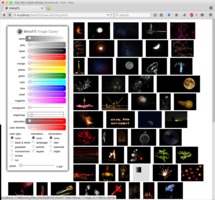 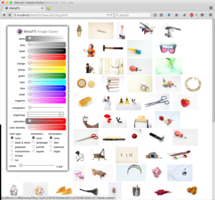 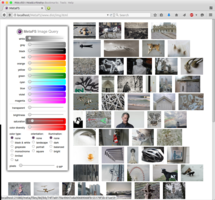 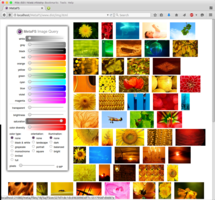 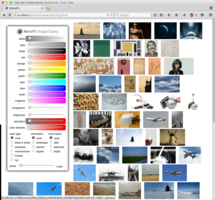 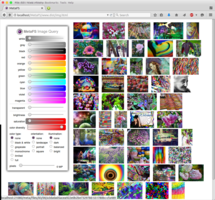 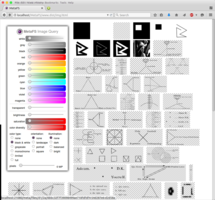 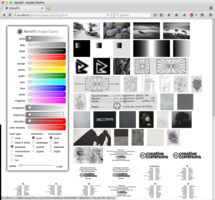 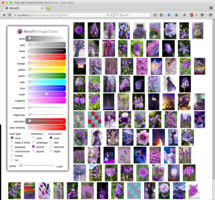 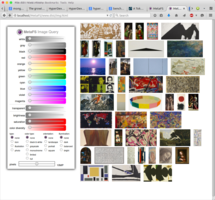 Web interface will be released later along with a general "data-browser" UI.

The default backend of MetaFS is MongoDB, a quasi standard NoSQL database. Yet during testing the "proof of concept" some significant short-comings showed up:

otherwise MongoDB is fast, easy to use, and supports JSON natively. The alternatives with their (dis-)advantages:

Efforts to immitate NoSQL of MongoDB with PostgreSQL backend:

I will update this blog post with updates when other DBs are considered and benchmarked.

The "proof of concept" of MetaFS (0.4.8) with MongoDB-2.6.1 (or 3.0.2) has a limit with 64 indexes per collection (which is the equivalent of a MetaFS volume) which is too limiting for real life usage. To be specific, 64 keys per item (and being indexed) might sufficient, yet, there are different kind of items with different keys so 64 keys for a wide-range of items are reached quickly:

Two test setups are benchmarked with 1 mio JSON documents where all keys are fully indexed: 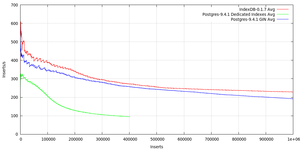 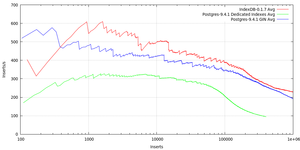 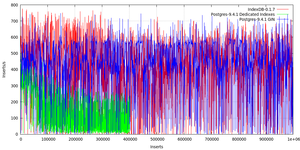 MetaFS::IndexDB-0.1.7, a custom database in development for MetaFS using BerkeleyDB 5.3 B-Tree as key/value index storage, saving JSON as flat file, starts fast with 600+ inserts/s and then steadily declines to 230 inserts/s after 1 mio entries.

Postgres-9.4.1 with dedicated keys indexes performs for the first 100K entries quite well and then steeply declines to 95 inserts/s, after 400K entries benchmark aborted. Since 9.4 there are NoSQL features included, see Linux Journal: PostgreSQL, the NoSQL Database (2015/01).

and the data structure is JSON with 30-40 keys, all keys are recorded and indexes requested if not yet created: until all keys of all items are indexed.

Postgres-9.4.1 with GIN (Generalized Inverted Index) indexes all JSON keys by default, no need to track the keys, and it performs quite well, alike to IndexDB; no surprise since both use B-Tree.

The "5s Average" reveals more details: MetaFS::IndexDB inserts remain fast alike Postgres with GIN, yet, the syncing to disk every 30 secs (can be altered) with IndexDB gets longer and CPU & IO intensive and causing the overall average to go down, whereas Postgres with dedicated keys falls quicker and likely syncing immediately to disk (has 5 processes handling the DB), and is less demanding on the IO as the system remains more responsive.

IndexDB-0.1.7 supports inequality operators: < <= > >= != and ranges, whereas Postgres-9.4.1 with jsonb_path_ops only can query (SELECT) on value or existance of keys, but not inequalities yet.

With every key additionally indexed the amount of to be written data increases: O(nkeys). Additionally, BerkeleyDB documentation regarding BTree access method:

which the benchmark pretty much confirms.

If delayed indexing with MetaFS::IndexDB would be considered, the index time would still be depending on the actual amount of all items in a volume, but having faster inserts but delayed search capability on the full data. So depending on the use case or choice, either data becoming quickly searchable, or having constant insertion speed.

IndexDB might scale a bit better post 10mio items, as Postgres+GIN shows a slightly steeper decline in performance - but that has be confirmed with actual benchmarks.

Both DBs without indexing at all as comparison: 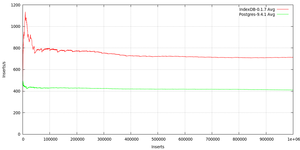 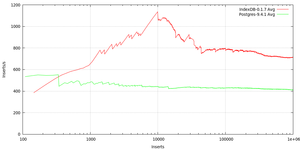 The image-handler got a major improvement, actually it's not much code which I added, but the little code is quite impressive in its effect, for example:

You can search images based on their color theme, the main colors 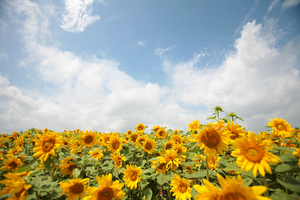 So, searching for ocean scenery with the sun present, a lot of blue, and sufficient yellow:

which results, in my case, with one single image:

Some yellow matches are obvious, the last image match is about the palms trunks and partially at the palm leaves: brown, the lower saturated yellow. So, you use the saturated color names, but the match includes lesser saturated and brighter aspects of that color - so keep this in mind in this context.

Although I've got the ocean (beach) scenery, there is no sun - perhaps orange would be more accurate:

You get the idea how searching with colors works, I deliberately included my moderately successful results with a very small image library of 800+ images.

So, for now mfind command line interface (CLI) is only available, but I work on some web demo which will focus on image-handler features, providing full featured image search facility.

There are many more image.* metadata to query:

PS: I gonna update this blog post and rerun the lookups with a larger image library (280K images).

Well, there are so many new additions since the last update back in November 2014, let's focus on marc, the tool and archive format which allows you to create, add and extract items from an archive:

creates the archive my.marc of the current directory, with verbosity enabled, and saves it one directory above. All items are saved with full metadata, so one can transfer MetaFS volumes easily.

Transfer a volume from machine to another via ssh:

Note: it's not a typo that the 2nd marc has no z, as the stream identifies itself being compressed. It also means, using z flag you still use .marc extension, no need to add .gz or so.

For all full documentation on marc, consult the Handbook.

First post covering version 0.4.7, the past 3 months I haven't updated the github repository as so many changes and updates occured:

I also started to develop MetaFS::IndexDB which eventually (around 0.6.x) replace MongoDB/TokuMX as they were ok to develop the "proof of concept", but now it's getting more serious MongoDB just is too memory consuming for this use case (see FAQ too), therefore MetaFS::IndexDB is focused to cover the required functionality while having a very small memory footprint.